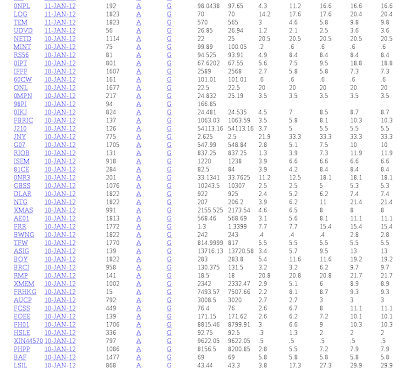 Just a quick recap of what is going on here

Rather than someone saying that stock 'x' is just about to explode and then going away to do research, I wanted to find all stock that characterized explosion and relate this to stock 'x'.

What I have found is that there are many ways to characterize possible stock rises.

As an example, I have had people say things like 'I follow the psar and then when the rsi increases it is the point to buy'  - this exact phrase has been said to me several times.

At this point I must introduce the system that I have developed, it is called oasis. This whole blog details the trials and tribulations of developing oasis and making it work.


Using oasis I can input statements such as the above and immediately see how well it conforms to a strategy that increases wealth - and indeed the above statement is indicated in the screen shot above. For a randomly chosen date on about 10th Jan this year, the above rows are the companies that were highlighted as following the rule "increasing psar with a subsequent increasing rsi" - the columns are: company, date, ref number, A (link to LSE graph), G (link to oasis graphs), close price, next days opening price (approx price that we would buy at), then 5, 10, 15, 30 and 60 day percentage increases - we can see it is not at all bad averaging about +8% after about 5 days .

But I believe I can do better. To this end I have taken the end of day data, calculated macd, vi, rsi on close, rsi on open, psars on open, close, high, low, stochastics, bollingers - these being some usual trading indicators, and then...

I have calculated mixed indicators; as an example I have psars on the macd, vi and rsi (psars on trend indicators are an excellent way to view triggers); stochastics on macd, rsi, vi, bollinger bands and psars (including the psars on macd, rsi and vi).

All indicators are stored in a database. We can think of them as generic indicators on the end of day data, we are not really interested in the calculation or indeed the specifics of indicators, we are interested as to when to buy and sell

And so to the process of developing a formula.

One of my current formula development processes starts with a report from oasis listing the companies that have risen over 45% in 2 days. Thankfully this list is pretty long and there is no shortage of companies to analyse - (getting a beta to mimic this report would be nice)

At random I pick a company and bring up the oasis graphs for that company centred around the time just prior to the increase. There are quite a few graphs (currently 24), each shows multiple relevant related  indicators along with the share close price for comparison. For detailed analysis, I bring up the exact raw data in tabular form.

I take this randomly chosen company and start a new alpha formula with a listing of all dates starting from a  designated period prior to the increase - I usually choose a period from the start of the prior year up to now.

The name of the game is to get a formula that only returns those dates for the company just prior to the price  increase.

At the moment I have 167 indicators that I can play with to reduce the number of returned dates to those just prior to the increase. If a new indicator looks like it could be useful, it takes about half a day to code, test, run all three exchanges and write a new report, dependent of course on complexity.

As an example of the use of an indicator, I have found that the 'stochastic on close' more often than not has a minimum of 0 in the period about 10 days prior to a rise - the exact period varies with the company under analysis.

Once I have a formula that limits the date to just prior to the rise (and possibly any other rises that are relevant for the company), I then run the formula against all companies for all dates. The report specifies the percentage rises on a given date for a company that meets the limiting criteria over 5, 10, 15, 30 and 60 days.

These are my alphas. I have many of alphas.

I then continue analysis and investigate the companies and dates that have not risen to the extent required and start to filter these out by either changing the allocated indicator values or adding new indicator values. This is really a balancing game, we want a report to return some companies with dates, but at the same time we have a set criteria on the formula to produce risers - that is to say, we don't want an empty report and at the same time we don't want a report that includes non-risers.

So the analysis continues until the formula achieves about an 11.5% rise over 10 days, 80% of the time, and without any non-risers.

This is our beta.

I currently have 8 beta's. It has taken weeks, sometimes months to create a beta. Each one has a slightly different tracking pattern; I have a couple of beta's that are 100%ers, that indicate a 11.5% company/date riser 100% of the time within about 10 days, but report one company between 2 and 6 months.

I then run the beta's against all my current exchange systems - NYSE, NASDAQ and LSE

oasis then automatically tweets the top 5 companies per beta, twice a day, here:

I am constantly looking for different ways to formulate a beta. Currently I am working on a beta in conjunction with LSE companies' Regulated News or RNS. Company and date RNS data is currently being automatically downloaded, cleaned, uploaded to oasis and analysis run each evening.

And hence we have oasis, the system that does all of the above

oasis allows, via a browser and internet access, creation, update, charting, reporting and tweeting on formulae against end of day price indicators, all in w3/html5 standard. Everything runs on an Oracle database, Oracle Enterprise Linux, and on a 12 core xeon processor system with solid state disks and 24gb ram and a UPS. End of day data is ftp'ed, cleaned and uploaded to a database where the indicators are calculated, all overnight.


I am currently using the tweets to trade, carrying out due diligence and my own manual analysis post beta analysis - the Google Finance link for the company is included on the tweet.

Any questions, queries or comments please email or comment :) GLA (good luck all)